I get a warning about Surface Transfer Coeffecient which i really dont understand.

What this warning means and how a surface coating (with specific sd-value) does not affect rain absorption? 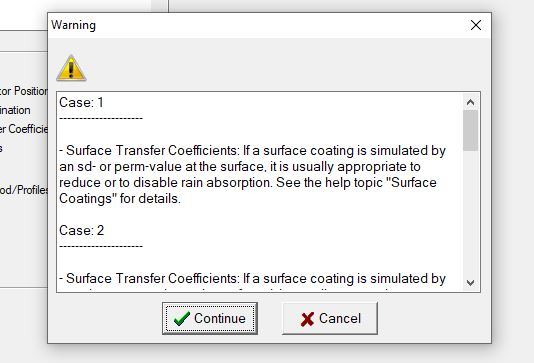 sometimes you have a thin layer in your component whose only effect on the component is its vapor diffusion resistance, for example a vapor retarder.

One option to model such a layer is to include it as an individual layer in the component. However, then you need to provide the full set of material properties, such as the thermal conductivity, the heat capacity, the moisture storage function etc., even though all these properties have a negligible effect on the simulation result, the only relevant property in this case being the diffusion resistance.

If that layer is on one of the surfaces, WUFI therefore offers an alternative option. You can specify an extra diffusion resistance on the surface, specified in terms of an sd-value. To model a vapor retarder (for example) on the surface, instead of including it as a separate layer you only specify the respective sd-value at the surface. For example, if there is a vapor retarder with sd = 100 m at the surface of your construction, this option means that you do not include it as a layer, instead you specify sd = 100 m at this surface.

For the convenience of the users, the input fields for the sd-values have drop-down lists with pre-defined sd-values, for example "Tiles" or "Acrylic Facade Paint" or "Metal Foil".

However, a user who has selected "Metal Foil", for example, might be tempted to think that the simulation model now includes a metal foil, making the component raintight. This is not so, however, the user has only specified a vapor-resistance corresponding to a vapor-tight metal foil, and no other properties usually associated with a metal foil. Rain water hitting the surface will still be absorbed. If you really have a raintight material at the surface, you have to model the raintightness separately, for example by switching off the rain. The warning you see alerts you to this fact.