Hi,
i have one question about simulation of absorption experiment. I made KLI file with climate conditions according manual, it is working.
I did a one-dimensional experiment with sandstone, I have A and wcap. I would like to use WUFI to check these parameters, but if I am creating a new material, when Dws, Dww, I need Acap, wcap and water content at 0.8.
What value of water content at 0.8 used, because I do not have a measured sorption isotherm. Also, what a internal conditions should I use ?
Can you help me please ?
Top

it seems you wish to do two things:

The formula which WUFI uses to compute the generated liquid transport coefficients only has two parameters: the A-value and the free saturation (see the topic Reference | Material Data | Liquid Transport Coefficients in the help file). WUFI also asks for the Reference Water Content w(80%), but this parameter does not affect the shape of the resulting curve, it only determines the starting point of the curve. You can check this by entering different values for w(80%) and watching the curve diagram.

Below w(80%) the liquid transport coefficients are assumed to be zero. So your choice of w(80%) only affects the resulting curve in a minor way, in particular if w(80%) is markedly smaller than free saturation. In this case the choice of its value only affects the behavior in the region of small water contents and not the high water contents where most of the action in an absorption experiment is.

As an example, the following diagrams show the results of simulated absorption experiments performed on Baumberger sandstone. In the first simulation the original Baumberger moisture storage function was used, in the other two simulations arbitrarily modified moisture storage functions were used. While the profiles of relative humidity (the green curves) are different, the resulting water contents (the blue curves) are the same after identical simulation periods, and so the resulting A-values are the same as well:

So for the simulation you can use any arbitrary w(80%).

Hello Thomas,
thank you for your answer. I understood it from your answer. Now i have question. I made my own test model in wufipro with baumberger sandstone as you.
i chose baumberger sandstone, i used original parameters from database.
I made climate KLI file according FAQ question with rain.
I set on the interior surface metal foil.
I set initially dry material and constant temperature 20°C.
But the course of wetting is different as your. I dont know why, also the maxium value of water content (210) is achieved after a long time. I upload picture with settings and course.
Also, it is possible to make this experiment in wufi 2D ?
And how i can find out, that my real experiment, where i got A,wcap with this type of simulation ?, for 1D water transport experiment i used sample with 50x50x30 mm.
Thanks for reaction. 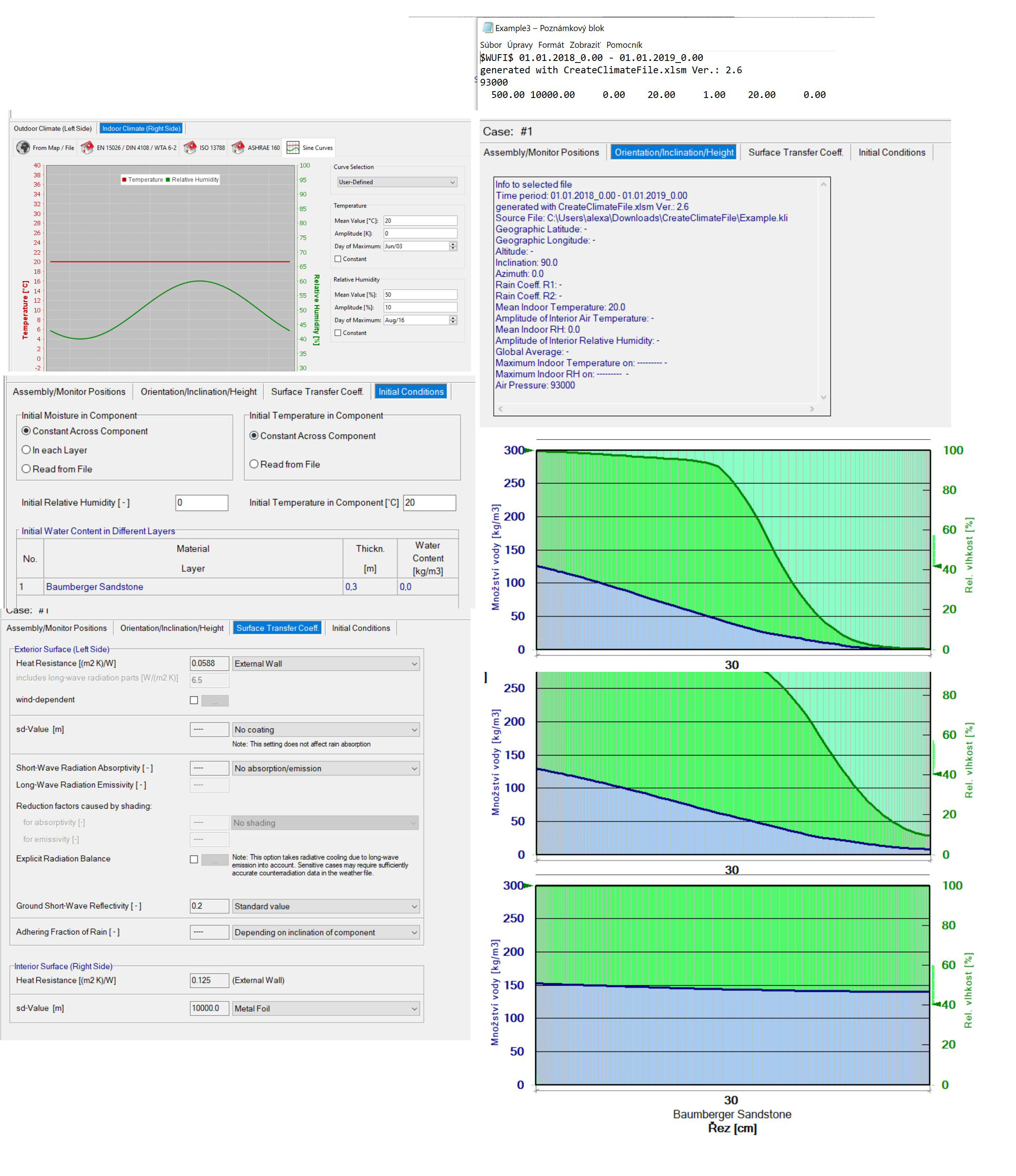 it seems the problem is the setting for the "Adhering Fraction of Rain". This factor takes into account that when rain water hits a non-horizontal surface, part of the water immediately splashes off and is not available for capillary absorption. For example, for vertical surfaces typically 30 % are splashing away and only 70 % stick to the surface. This can be taken into account by entering 0.7 in this field, the rain rate read from the climate file will then be multiplied with this factor to take the reduction of available rain water into account.

The default setting is "Depending on inclination of component", and although WUFI understood that the inclination of your component is 90° (see your screenshot with the blue text), apparently this information is not properly taken into account when a KLI file is used. It seems that the "adhering fraction" is set to zero, and no water reaches the surface of the component. The slow increase of water content you see during the calculation is simply the hygroscopic uptake of water vapor from the moist ambient air.

If you select "user-defined" from the drop-down list and manually enter "1" for the adhering fraction, the simulation should run as expected.


Also, it is possible to make this experiment in wufi 2D ?

Yes, but it is much less convenient.


And how i can find out, that my real experiment, where i got A,wcap with this type of simulation ?, for 1D water transport experiment i used sample with 50x50x30 mm.

I'm not sure I understand the question. If the sample was homogeneous and its surface was wetted uniformly, the absorption process is basically one-dimensional and you can simulate it with a one-dimensional calculation.

Hello Thomas,
yes problem was in reduction of rain. Now it is working very well. Thank you for your answers.
Top
Post Reply
5 posts • Page 1 of 1