Difference between the Simulated result and the Measured result

Difference between the Simulated result and the Measured result

Hello!
I meet a problem with the calibration between the simulation and the measurement.
I have a wall assembly monitored for 10 months. And then I had all the monitored environmental data (RH, T, rain, rind and radiation...) and the wall assembly simulated. The results generally show a good consistency with the Relative Humidity and Temperature of the measured position (interface of XPS board and Rock Wool). However, in the period when the indoor were air-conditioned, significant differences (5 to 10% RH) occur between the measured (md) RH and the simulated (sm) RH. I used the normal materials for the construction and the material data from WUFI's database for simulation. I have tried to change the properties of the coating, gypsum board and rock wool, but couldn't get a better result. I have no idea to adjust the setting in the simulation now.
Could anyone please help me with that? Thank you! 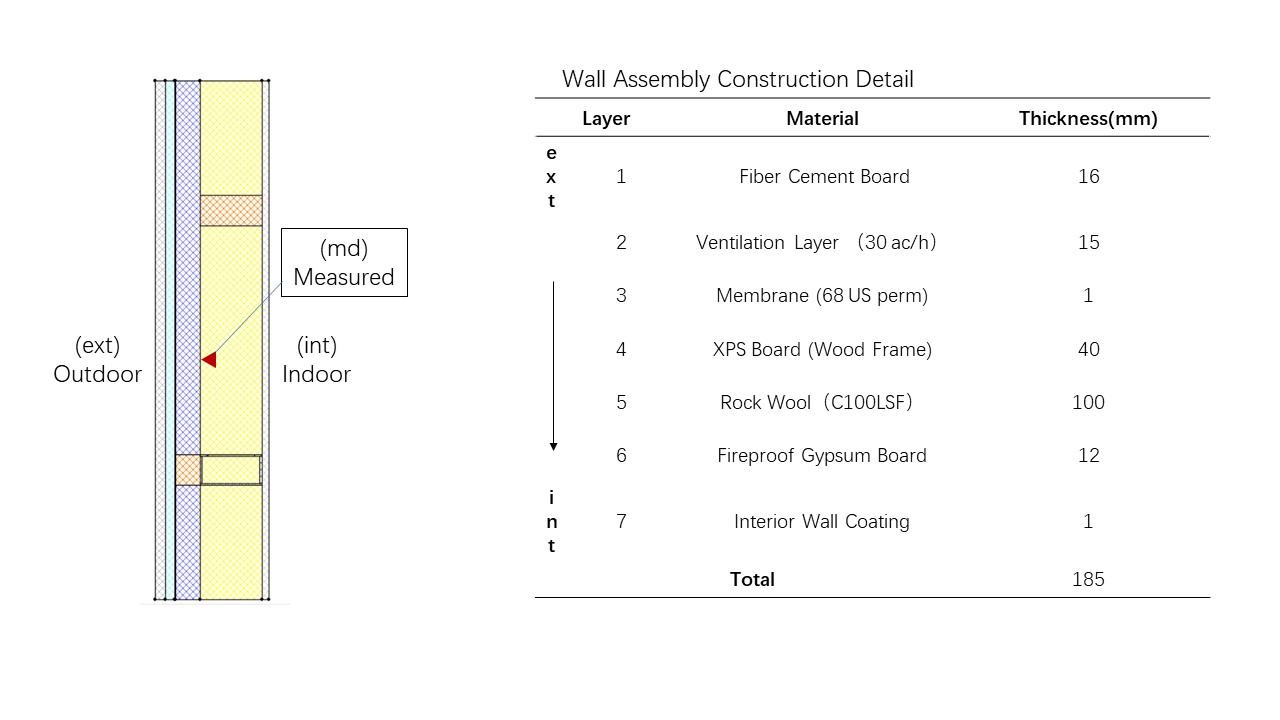 In your circled cases, we have different temperatures, but conflicting values for the relative humidity in the component. Only one of these conflicting humidity values can correspond to the vapor pressure being the same in the component and in the indoor air. By looking at the vapor pressures you may be able to find out which one of the conflicting values is the more plausible one. (This assumes that there are no other major humidity sources and the main transport process occurring is the vapor diffusion exchange between the measurement point and the indoor air.)

On the other hand, if the measured humidity corresponds to similar vapor pressures, this may be the more plausible result, and the simulation will correspond to a temporary decrease of vapor pressure below the indoor level. One would then have to find out why this happens in the simulation.

Hi, Thomas. Thank you for your quick reply.
Unfortunately, I didn't measure the vapour pressure, but similar vapour pressure between the measured position and the interior surface during the periods were seen in the simulation result by WUFI2DMotion. However, I have measured the temperature and relative humidity of the different interfaces. And it's found that maybe the condensation played as the additional moisture in somehow. Because during the first two circled periods, the Rh of the measured position (as discussed before) was significantly higher than the opposite side of the Rockwool (contact with the gypsum board) (85% to 65% Rh in average). And during the last two circled periods, it's much lower (60% to 75% Rh in average), while the simulated Rh is also lower than the measured Rh at the interface between Rockwool and gypsum board (65% to 75% in average ).
How do you think about the possible influence of condensation, which might be underestimated in my simulation by any reasons?

zhanqsh wrote: ↑
Fri Sep 18, 2020 4:45 am -1100
Unfortunately, I didn't measure the vapour pressure [...] However, I have measured the temperature and relative humidity of the different interfaces.

So you can calculate the vapor pressure from relative humidity and temperature. For the interfaces and for the indoor air.


And it's found that maybe the condensation played as the additional moisture in somehow. Because during the first two circled periods, the Rh of the measured position (as discussed before) was significantly higher than the opposite side of the Rockwool (contact with the gypsum board) (85% to 65% Rh in average).

Condensation and later release of the condensed moisture may be a possibility. In your diagram, however, no condensation is obvious, at least not at the measured interface, because the relative humidity never reaches 100 % there. The temperatures and the humidities at that position look quite harmless. But maybe the timber stud visible in the cross-section diagram is a thermal bridge where condensation might occur. It does not even need to be condensation, maybe some parts of the wall (like the timber) can simply take up some normal sorption moisture during more humid periods and release it during drier periods. The simulation should automatically include this effect, but maybe it does not do this well enough for some reason. And of course the problem might be something completely different after all...